Welcome to the 22nd JCC Sonoma County
is back on track 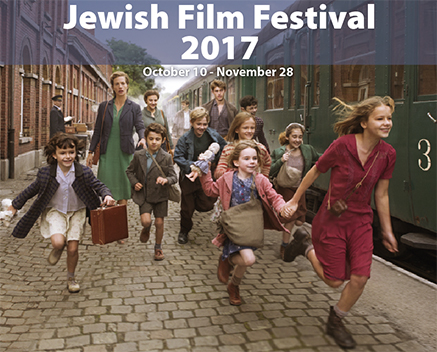 
The festival opened with the film "Fanny's Journey", on Tuesday, October 17th. From that moment on, the rest of the program should run as planned, and as advertised.
The film "Harmonia" which we missed due to the firestorm was rescheduled and will be screened on Tuesday, December 5th, 1:00 and 7:30 pm.
While some of you came on the first night as the fire was still raging, many had to miss "Fanny's Journey" due to the circumstances. By the generosity of the film distributor, Menemsha Films, and Rialto Cinemas, we are able to have an encore screening for everyone who missed it. If you have tickets for this film that you did not use, you do not need to buy new ones, just bring them with you to the theater.
These past weeks have been hectic, uncertain, and difficult for many. We understand that these are not normal times but we decided to go on with the festival and give the community an opportunity to come together for a much-needed respite.
If you bought tickets, but misplaced them or can't print them, we will be able to check you in by name at our desk on the left-hand side of the main entrance.

The JCC Sonoma County Jewish Film Festival is here again. Join us for a great crop of Jewish themed films from around the world.

Film is a unique art form that brings us experiences from other times and places, otherwise not available to us in such a vivid, immersive and deep way. So let us all soak in the experience, and broaden our horizons together. And most importantly, Enjoy!

This was supposed to be the opening film of the festival, but due to the fire got pushed back.

Take the archetypal, biblical story of Abraham, Sarah and Hagar, place it in today’s world and you get a completely modern, relatable story. Set in the Jerusalem Philharmonic, the film gently uncovers the mythological triangle, the mothers’ bond, the rival prodigy, and the patriarchal conductor, illuminating the emotional roots of this ancient conflict. Harmonia is spiced with beautiful music organically woven into the narrative, with gorgeous, award-winning cinematography.

Ellen Blustein the JCC ED, and Doron Hovav the JCC Jewish Film Festival program director went on KRCB-FM: Sonoma Spotlight with Roland Jacopetti to tell you about the opening film: Harmonia.
If you missed it on the radio, you can take 5 minutes and listen to it online on KRCB's podcast.

The Chop: A kosher butcher finds himself working at a Muslim Halal shop.
Women in Sink: Arab and Jewish women share their views on politics, history, and love while getting their hair shampooed.
Dear God: A guard sets out to fulfill the wishes of a mysterious woman who leaves notes in the Wailing Wall.
Ave Maria: Oscar nominee 2016. Israeli settlers crash their car into a convent, disrupting the silent nuns.
Wannabe: A neurotic Jewish boy must win over his crush by impressing her skeptical Jamaican family.

The special event tickets are not included in the season pass and need to be purchased separately.

Discover this hidden story of Iraqi music. Majid Shokor, an Iraqi-Australian from a Muslim background, is on a quest to reveal the untold Jewish role in popular Iraqi music. The film follows Majid’s bold journey from Australia to Israel, Europe and Iraq, to meet Iraqi musicians of all faiths - Jewish, Muslim and Christian - and to unite them in a concert where music and culture transcend religion and politics"

Don’t be left wanting more! Join us after the film for a live concert with The Qadim Ensemble, with music from the Middle East, including Iraqi songs.

A reception of Iraqi sweets and mint tea by the Sonoma Wine Shop will follow the concert in the theater lobby.

These tickets must be purchased separately.

Then, Saturday night, after the musical special event, join us for

Creating the musical special event around the film “On the Banks of the Tigris” got us so inspired, and left us hungry for more of this Middle Eastern culture. So we joined forces with the wonderful Sonoma Wine Shop to bring you an Iraqi feast: a full Iraqi dinner, with some Simbusak, Tirshi, Kibbeh, Zangoula, and many other Iraqi delicacies that will open your heart and satisfy your senses.

All screenings will be held at Rialto Cinemas:
6868 McKinley Street, Sebastopol
The theater is wheelchair accessible.
Call Doron Hovav at (707) 526-5538 to reserve a wheelchair spot.

Get your tickets now by clicking on the
“Buy Tickets” buttons.

Post-war Hungary. What happens when two Orthodox Jews arrive at the village train station with mysterious boxes, as the locals are preparing for a wedding? Some villagers fear the men might be heirs of the deported Jews, and worry that more survivors will come and pose a threat to their ill-gotten gains, while others feel remorse. Their world is turned upside down. One of the most beautiful films you’ll see all year, 1945 poses questions and exposes emotions with subtlety and intricacy rarely shown in cinema.

The evening-show online inventory is sold out. We will be releasing a small number of tickets for that show on the day of.
Please make an effort to come to the matinee if you can. It is SO worth it!

In 1972, hijackers took control of Sabena Flight 571 from Brussels to Tel Aviv, kicking off thirty nerve-wracking hours of human, military and political drama. The film poses significant questions, with a cinematic re-enactment interwoven with archival material and exclusive interviews with three Israeli Prime Ministers who were part of the rescue effort, and one of the hijackers. Post film discussion with Dr. Ziv Rubinovitz, Israel Institute Teaching Fellow, Sonoma State University.

A romping, multi-culti romantic comedy, that deals with the clash of generations, religions, and cultures in a playful, witty way. Two young men, David and Khaled, want to get married. Should be easy, but how smoothly will it go when it involves a homophobic Arab father, a pseudo-orthodox Jewish mother, and an unexpected pregnancy? Many things need to be set straight (no pun intended) before they can exchange their vows and live happily ever after.

Underwritten by Terry and Russ Gurevitch

The winner of over 22 audience awards, Fanny’s Journey is uplifting entertainment for all ages. Based on an autobiographical novel by Fanny Ben-Ami, we see the story of a brave, resourceful young girl who is entrusted with the fate of a small band of children, fearlessly leading them through the Nazi-occupied French countryside on a perilous mission to reach the Swiss border. Impressive period details and fine camera work brings history alive for oldsters and youngster, alike.

Here you can find a digital version of our brochure

Here you can find the order form to fill, print and send to the JCC  if you choose not to buy online

We would like to thank ALL the sponsors who make this festival possible for all of us.